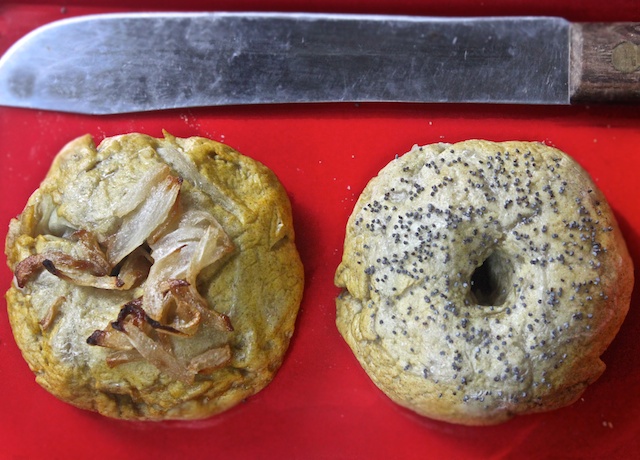 We made it back from our vacation in Philadelphia and were saddened to leave such a beautiful city. Our trip started out pretty normally. We opted to take our car — to better accommodate our sightseeing agenda, and my inability to pack less than 8 bags for the fams for just 1 week. The countryside was beautiful, the drive was relaxed, and the weather was sunny, clear and perfect. Once we began to approach the city, thoughts of our upcoming adventure immediately started to flourish in my mind. I thought about all of the vegan friendly restaurants I had read about, the history of the city itself, the architecture from neighborhood to neighborhood, the abundance of parks and murals that weave throughout the urban landscape, and of course, my favorite peoples who lived in Philadelphia that we were headed to see.

Just as my husband and I saw our exit- putting us only a few blocks from where we were staying- we hear a “knock, knock, knock, knock” coming from our car. The gauges started to go haywire and we knew it was bad. Once we pulled the car to a nice safe spot in the middle of I- 676, we realized the damage. Our engine was dead. Our sweet little jeep drove us ten hours right into the middle of Philadelphia, and died. Poor car. I think it knew we were destined to stay in Philly an extra few days (and that I was never really thrilled about owning an SUV).

Luckily for us, the traffic on the freeway was really heavy, making the passing cars not much of a threat. In fact, people were slowly driving by offering help! Lots of people! Some random friendly man even jumped under our car, only to emerge with apologies and a prediction that our engine was doomed. Yeah, we knew… and thanked the man for his time and concern.  I was immediately impressed by the kind nature of the folks in Philadelphia, especially given the severity of the traffic jam they were so happily driving into. Our car was dead, and I was oddly enough thrilled that we were in the middle of the city. We made it, right? It seemed pretty remarkable that we were able to drive that far with our old car apparently being on the verge of death. Besides, I had Chinatown on the brain… no time for worrying.

Eventually we were rescued and brought back by my hero and best pal who was hosting us during our stay.  The rest of the trip was blissful. We fell head over heels in love with Philadelphia, and we are making plans to move there very soon. In fact, all of my free time has been dedicated to house searching and daydreaming about all the gluten-free food I can stuff my face with (that I don’t have to cook myself!). My son and husband will finally get their vegan Philly Cheesesteaks whenever they please. And burgers, and ice cream, and pizza. A luxury that we just don’t have in the middle of Ohio.

As much as I have grown accustomed to living in the Midwest… it’s time to mosey on.

I cannot wait to share with you guys my culinary discoveries as a new Philadelphia resident. Compared to Columbus, Ohio… Philly ♥’s vegans. We only ate at a few restaurants on our trip- but the one’s we ventured into were so vegan friendly, I felt confused and elated.  It still doesn’t even seem real to me (I know, I’m sheltered). And the variety of shops for foods and kitchen gadgets…. one word: Wheeeee! The city also has a lot of great revitalization and sustainability projects going on that made me rethink how I was going about reducing my own carbon footprint. We’ll be trading in our gas guzzling cars for bicycles; and luckily, the Jeep kinda took care of itself. :) 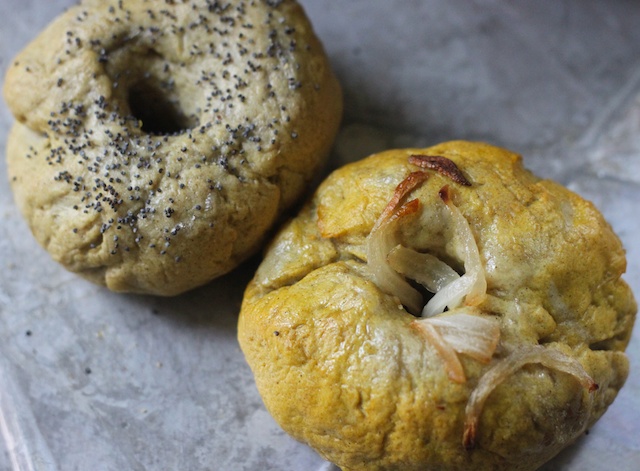 While we were in Philly, soaking up all the awesome- I received an email (from the same wonderful gal who requested a gluten-free focaccia) asking whether or not I might be working on a bagel recipe.  How did she know I had been kicking around a bagel recipe for the last two weeks? I have been experimenting a lot with breads and the like, and I thought it high-time to step it up a notch with some bagel-age.

I happily responded… yes! Why yes I am!

And here it is… a gluten-free bagel recipe that is prepared pretty much the same way as a regular bagel, but there’s only one rise time- so it’s even a little faster to make.

Mix together “flour mix” ingredients (except for 1 additional cup of sorghum flour) and set aside. The buckwheat flour I used was called “Acadian Light Buckwheat Flour”, and it seems to be a touch lighter in both taste and color- but does yield a slightly yellowish tinge to baked goods. I purchased a bag of it from Whole Foods, but if you cannot locate it,  I would assume regular buckwheat flour would work just as nicely.

Gradually stir in flour mixture and mix until well combined. Your dough should be easy to handle. 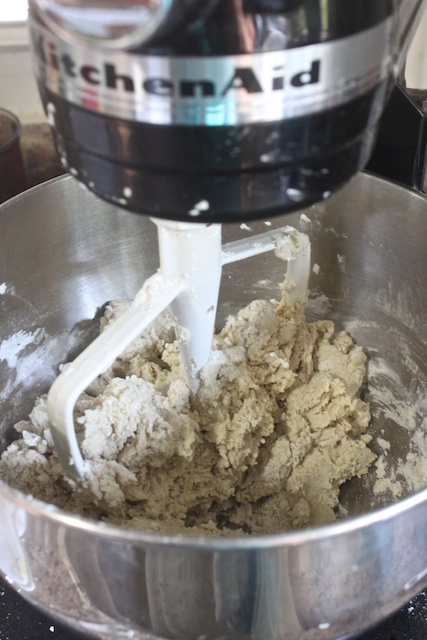 Beat on medium speed about 1 minute, or until dough becomes very sticky. 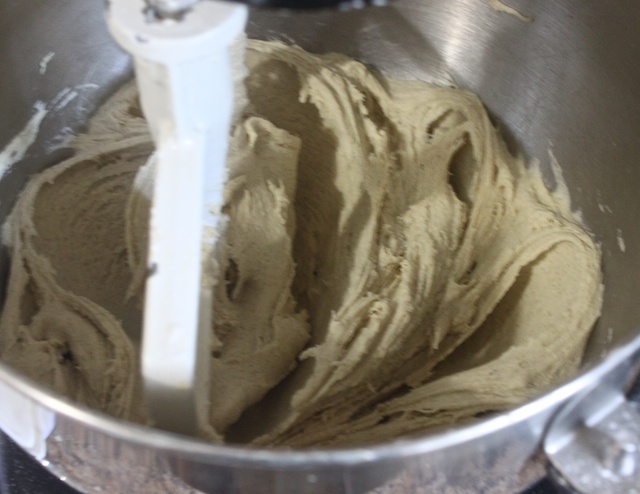 On low speed, mix in 1/2 cup more sorghum flour. Remove beater, scrape down sides of bowl, and using your hands, mix in up to 1/2 cup additional sorghum flour until your dough is once again workable. The goal is to get a soft and workable dough… not too dry. If you want any mix-ins, like raisins, chocolate chips, onions, garlic, bacon bits… whatever… mix them in now.

Divide dough into 6 sections and shape into even balls. Dust your palms with sorghum flour if necessary to keep from sticking. Insert your finger into the middle of the ball to make a ring out of the dough. 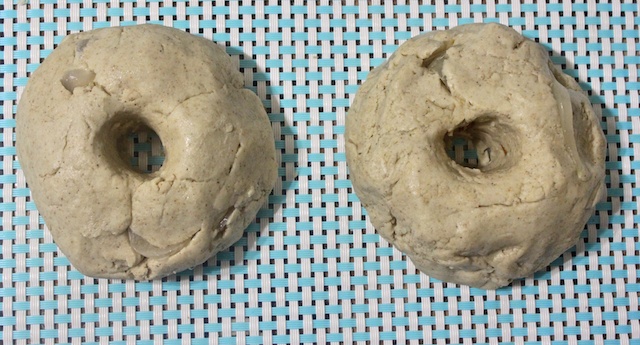 Set aside in warm area and let rise about 30-45 minutes. Before the bagels begin to rise, you can use your finger dipped in water to smooth the dough on the tops of the bagels. This step isn’t necessary, it just makes a more uniform texture. 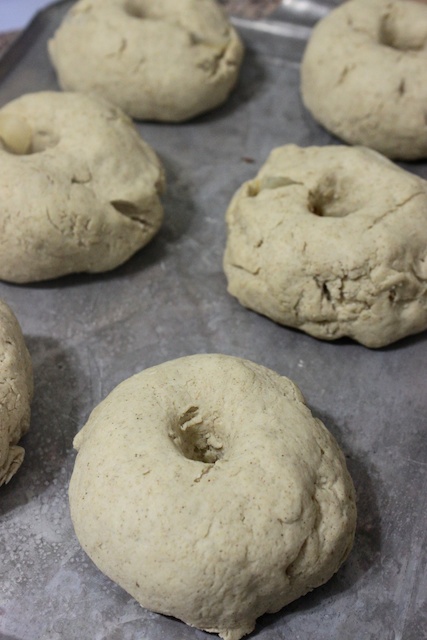 Prepare any toppings at this time. I opted for some thinly sliced sauteed onions on half of my bagels. Just slice them thinly and saute in a touch of margarine until translucent. Cook them until dark if you like yours crispy. 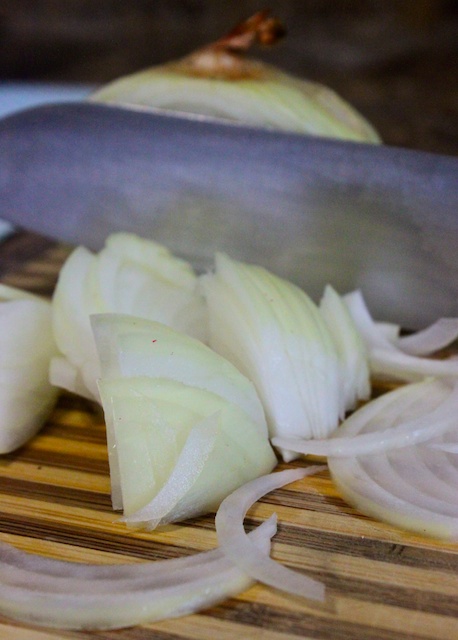 Bring a small pot of water (with a few teaspoons sugar added) to a boil and preheat your oven to 375 °F.

Once bagels have risen, drop one at a time into the boiling water and let boil about 1 minute, flipping halfway. Using a spatula or slotted spoon, remove bagel from water and let excess water drain off. Place onto lightly oiled and cornmeal sprinkled cookie sheet. Repeat with all bagels until every one has been boiled.

Prepare the cornstarch glaze by mixing the cornstarch and water and then microwaving (or boiling) until a thick gluey substance is made. Brush onto bagels and top with toppings. Poppy seeds are an easy topping that add a nice texture to your bagels… but cinnamon and sugar is yummy too. Get creative! 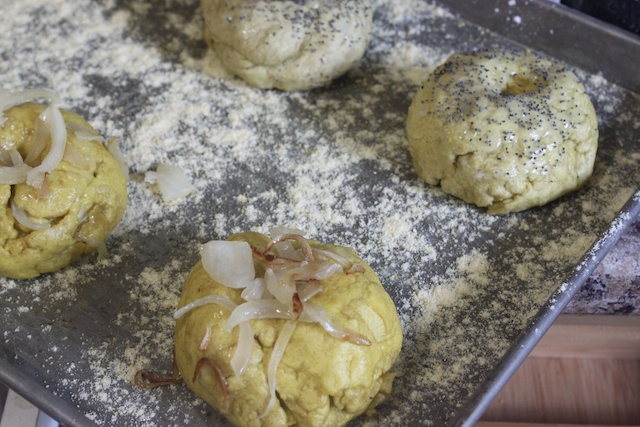 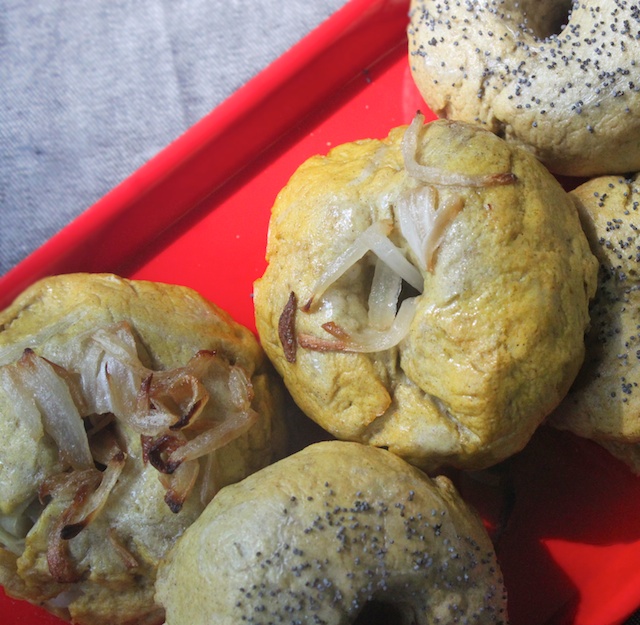 Like most bagels, these are best enjoyed fresh out of the oven, or toasted. And, of course, vegan cream cheese is always a nice touch.