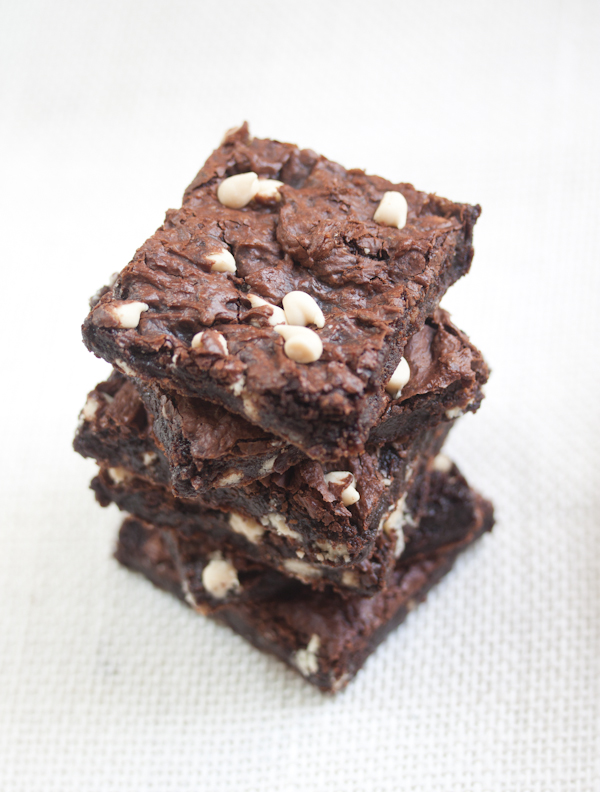 I’ve dubbed these brownies “ultimate fudgy brownies” because–hands down–I believe that they’re the best brownies I have ever baked.

For over the past 10 years or so, I’ve been on quest to create a brownie that will make me weak in the knees. I’ve sample many other so called “ultimate” or “killer” brownies from various upscale bakeries and I have never once walked away satisfied, or even very impressed. As silly (and unrefined) as it may sound–my favorite brownies pretty much were a product of a boxed mix. Yep, back in the day Debbie and Betty were my go to ladies for a serious brownie fix, only because for years I had a hard time achieving the same results with homemade recipes. You know the kind that’s ooey and gooey and a little bit chewy with a paper-thin crispy top? The boxed mix variety–for some inexplicable reason–epitomizes the “ultimate” brownie to me, at least texture-wise (definitely not ingredient wise). I have quite the discerning palate, non?

Well, to appease my less than refined taste in brownies, I have worked tirelessley to re-create a suitable homemade version that’s gluten-free, vegan and… not from a box. Countless batches of brownies sacrificed themselves down the disposal for this recipe. It has taken years (and tears!) and lots of dedication, but I think I’ve finally done it.

Thank goodness… now I can spend more time obsessing over a different dessert for the next decade.

I highly recommend using a metal pan, as it will produce the best texture in the brownies. If you have to use a glass pan, be sure to reduce the oven temperature by about 20 degrees, and bake for a touch longer.

Place the chocolate chips into a large heat-safe bowl.

In a medium saucepan over medium heat, combine the sugar, margarine and 1/4 cup of the coffee and bring to a boil, stirring often. Once boiling, immediately remove from the heat and pour the hot sugar mixture directly onto the chocolate chips, stirring quickly to combine thoroughly. Transfer to the mixing bowl containing the flours along with the prepared chia gel and vanilla and mix on medium-high speed until smooth. Add in the additional 1/4 cup coffee and mix well. Fold in white chocolate chips.

Spread the batter in the prepared baking pan–the batter will be tacky. Bake in preheated oven for 45 to 50 minutes. Let cool completely before cutting into squares and serving.