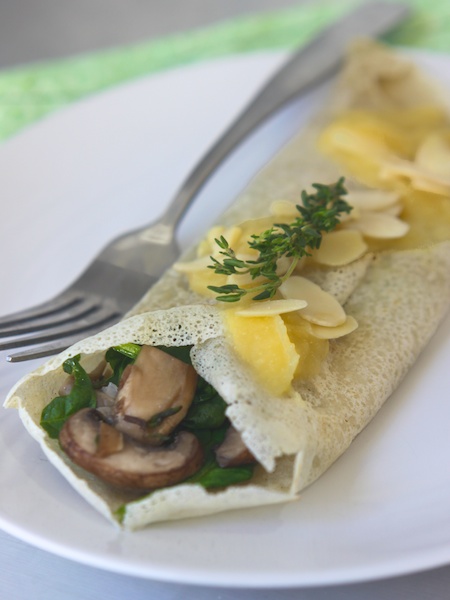 Here’s one variation of a crêpe recipe I have been kickin’ around for a while.  It’s a touch lighter and airier than an “eggy”, glutinous crêpe; but, it is still very delicious.

This recipe works great for both sweet and savory filled crêpes.

Making crêpes is very similar to making pancakes… except one thing I have always done was refrigerate the batter before using. I actually stumbled upon this technique by accident while making my first batch of vegan crêpes, about 10 years ago. Wow, time flies, eh?  I made up a gigantic amount of batter for those crêpes, and since I was cooking them only for myself, I wound up using only a bit of it. Not being wasteful, I refrigerated the rest of the batter to use the next morning for breakfast. The crêpes the next day were 100% better than the batch the day before. They cooked up nice and golden brown and more even textured (less “holey”) than the one’s I had made the day before

Since then I have discovered that many people make crêpes this way… so I guess there’s a method to that madness.

Anyways, refrigerate your batter for at least a couple of hours (preferably overnight).  Lightly spritz with cooking oil, or smear with a touch of margarine as often as needed during the crêpe making process- if you are using non-stick pan, omit this step.

Preheat the pan over medium-high heat.

Drop about 1/3 cup of batter onto the hot pan while tilting the pan to make the batter form a circle (do this off of the heat). This part is kind of hard to explain in words, but is very easy to do. Basically you are trying to create an even and thin layer of batter as quickly as possible so that the crêpe ends up thin and delicate and shaped like a circle. After all these years, I still have trouble getting them to form perfect circles every time. :\

Cook until the crêpe is lightly browned on one side and then flip. This usually takes about a minute or so. The edges will curl up nicely and you will have no problems getting a thin spatula underneath it to flip. Don’t force it though, like a pancake- they will be messy if you get impatient!

Cook the opposite side about 40 seconds to another minute, or until lightly golden brown.

This morning I rushed on the fridge time… so they didn’t get quite as golden-brown as I would have liked. But they were still tasty as heck. Lesson learned- don’t rush a good crêpe!

Repeat until all batter is used.

Fill immediately with whatever your heart desires and wrap it all up.

I chose to saute up some shiitakes, criminis and oyster mushrooms with about 3 tsp of fresh thyme. Once the mushrooms were nice and tender I threw in about a handful of fresh baby spinach and cooked it just until it wilted. I wrapped it all up in the crêpe, and- keeping with my crazy Autumn obsession- topped it with a puree of acorn squash, miso, and a few tablespoons of almond milk. Then I topped the whole thing with some sliced almonds. 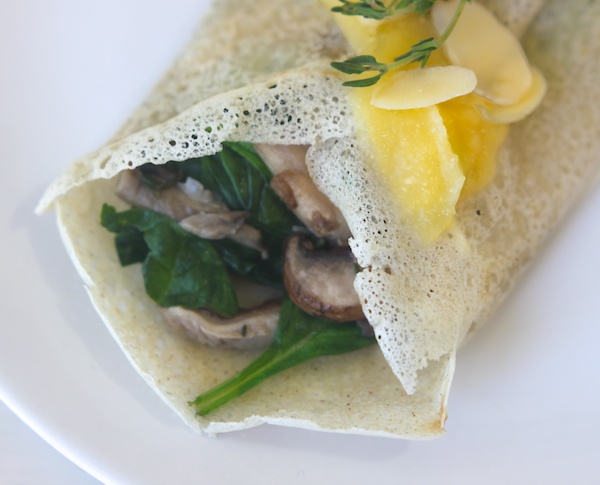 My son opted to have his filled with peanut butter, sliced bananas, strawberries, and flax seed with a touch of powdered sugar sprinkled on top. I really should have gotten a photo of that, but it was gone in an instant.

Here’s another shot of my savory crêpe: 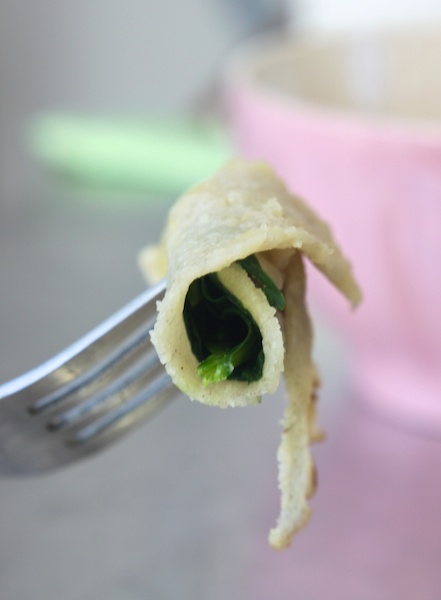 Honestly, I could probably stick any old thing in a crêpe and still find it palatable. I kinda have an obsession with crêpes. I seriously don’t make these things nearly as often as I should.

Thank you, Caitlin, for the kind reminder! ♥