Let me start off by extending a heart felt thank you to everyone who left comments and sent emails in support of my cookbook project. I have been working tirelessly on the darned thing and the support from you guys just makes doing it so much more worthwhile. ♥ In fact, some of the responses I received were down right tearjerkers… but I digress.

Now, please allow me to whimper for a moment.

Somehow, in the past few days, I caught some kind of bug.  Not the cute and squirmy bugs that come in all shapes in sizes and iridescent colors. Nooo. I got a bug that makes your insides and outsides feel just awful. It’s the yukky kinda sick where you can’t pinpoint anything specific that is making you feel horrible … but you know you just want to lay on the couch, sip gingerale, whine constantly while reading random books you haven’t picked up in ages, and have your husband bring you blankets every hour- piling them up until you are no longer visible to him or your children and you would prefer it stay that way until the next morning.

And when I am feeling sick like this, I only ever want one single food (besides gingerale, of course): potatoes.  Generally I prefer them mashed- to act as simple bland sustenance to get me through ’til the sickness passes. But today, for some reason, I was craving fried potatoes. And, I was just sick and delusional enough to think I could easily make some myself, you know, real quick-like.  Well, it ended up being a fairly quick process… but you should see the mess I have waiting for my dear hubs.

Though I set out to make an aloo tikki type ball of fried potato deliciousness, my foggy brain and inability to lift anything over 3 ounces got the best of me. Right as I was shaping the little guys into patties, I decided that I needed to expedite the process with my deep fryer. Because flipping the patties over in my cast iron pan was just too much work. There were a few moments where I questioned my sanity, operating a giant vat of superhot oil with pretty much no strength left in my appendages to even fish the fried food out.. but it was all good.

These were just what the doctor ordered. Crispy and greasy and filled with mashed potatoey goodness. They left me feeling full and a little less grumpy.

This is a recipe for aloo tikki, but this version is deep fried, rather than shallow pan fried. Because for me, extra greasy easy fried food + flu = feel better faster. :)

Chop potatoes into approximately 1 inch cubes and  begin to boil a large pot of water (about 10 cups). Once water is boiling, carefully drop in potatoes and reduce heat to medium high. Allow water to come back up to a boil. Once the water is boiling, set your timer for about 7 minutes… or cook until potatoes are fork tender.

Once the potatoes are finished cooking, drain and run briefly under cold water. Transfer to large bowl and mash up with a potato masher, leaving fairly large chunks.  You want this to be a “rough” mash. You can also use a fork or mix briefly in your electric mixer. 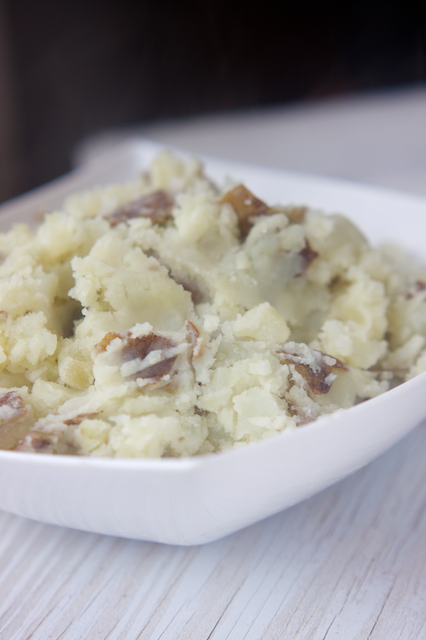 In small pan, combine leek, ginger, garlic, turmeric, cumin, garam masala and lemon zest with a touch of cooking oil and fry over medium high heat just until fragrant… about 2 minutes. Stir spices into the bowl with the potatoes, along with the besan flour, salt, and lemon juice. Fold in peas and cilantro. 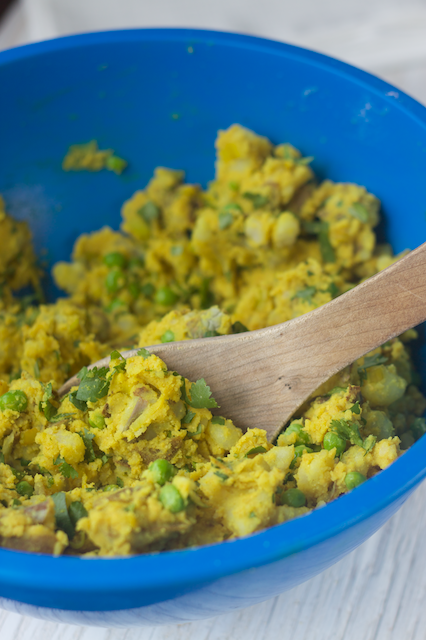 Shape into patties about 1 x 2 inches. 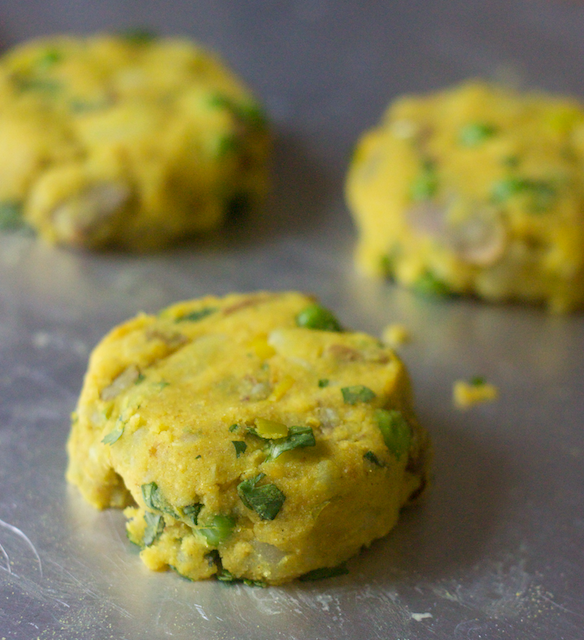 Deep fry at 360 °F for about 3 or so minutes, until they turn nice and dark golden brown. Let cool to just above room temperature and then serve.

Also, to make them more authentic-like, you can pan fry these in a non-stick pan (okay, I made a batch in my cast iron skillet, after all). Fry over medium-low heat with about 3- 4 tbsp cooking oil. I let mine cook until golden brown on one side, and then flipped and cooked the other side until golden…adding a little oil as necessary. These were equally as delicious (just not as uniformly golden) as the deep fried version.

And, I ate mine with some tamarind chutney, which I highly recommend you do as well. 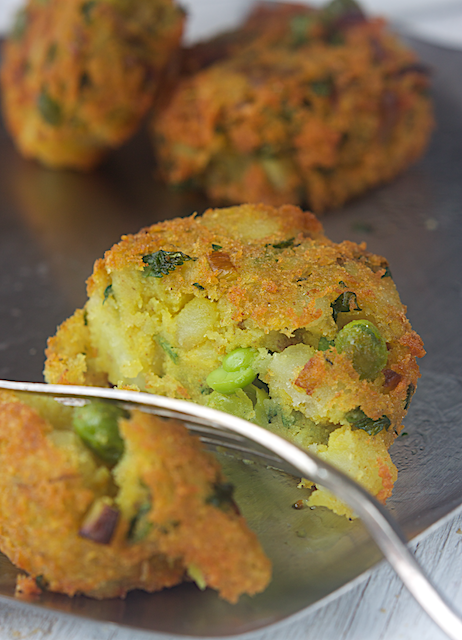 * No, I don’t ever go by “Ally”… but I always envied those of us who do! And it’s better than calling it “Ally Tikki”… that just seems absurd.